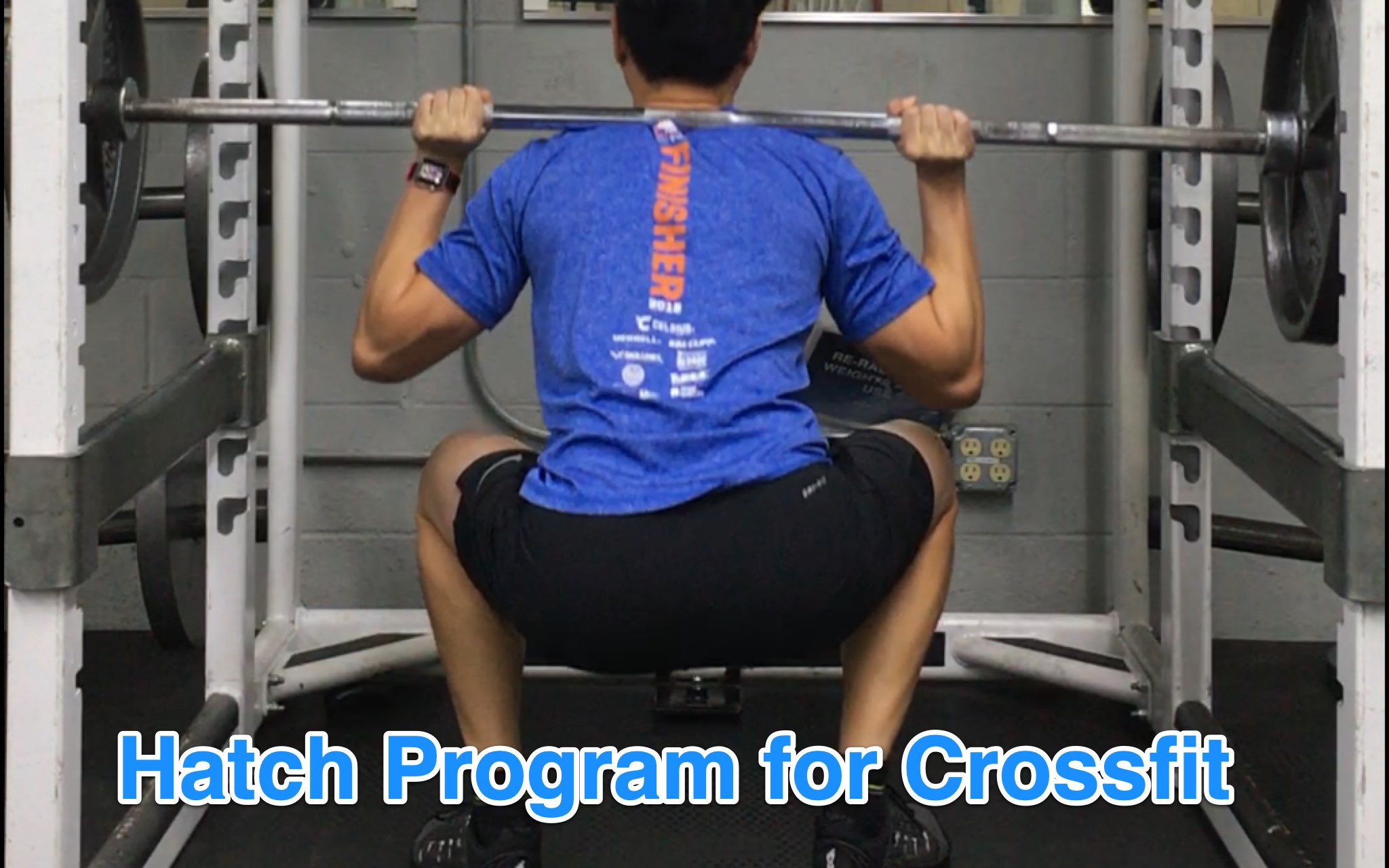 Been doing Crossfit for a few years and realize regular WOD programming is not helping me improve leg strength so I’ve started a leg training program called Hatch. The goal is to increase leg strength which should translate to better performance in WOD’s. I will put this to the test.

It’s been a little over 2 years since I started Crossfit. Prior to that I was doing boot camp / circuit training type workouts for around 3 years. The biggest difference coming into Crossfit from circuit training was the amount of weight lifted. Whereas before I was having to do a lot bodyweight movements now I was challenged with the world of heavy dumbbells and barbells.

My first Crossfit Open was 2017 only 3 months after starting. Stubbornly I did that one RX (cause why not) and struggled with anything having to do with legs (weighted lunges, squat snatches and thrusters). I came out of the open realizing that my max back squat of 185 lbs at 135 lbs bodyweight was not helping my performance so I started squatting more.

I didn’t choose any particular program just did 5×5 back squats / front squats a few times a week. However, within a month of starting I developed Pateller Tendonitis. I’m pretty it was caused from the increase in strain on my knees going from circuit training to Crossfit and also doing extra squatting work. While my heart was in a good place wanting to get stronger unfortunately my tendons weren’t ready. If you want to learn more you can learn how I used PRP treatment to fix my tendonitis. In the meantime, what this meant was for about a year I avoided any leg movements where I would have to go below parallel which meant my leg strength stagnated which meant I still sucked at WOD’s with legs involved (which is like most movements in Crossfit).

2 years later my knee is feeling better so I’ve decided to go back and dedicate time to increasing leg strength and that’s where the Hatch Squat program comes in.

Hatch is named after Olympic weightlifting coach Gayle Hatch. It’s a 12 week program where you back and front squat 2 times a week. The rep and set schemes change each day and are based off percentages of your max back and front squats. You can learn more here.

I like how Hatch works both back and front squats. Other programs tend to focus on either back or front, but rarely both. Having a good front squats carries over to many Crossfit movements like cleans, thrusters and even wall balls (still hate them). Also, I like how the program is 2 times a week and each session when done is anywhere from 35-50 minutes (depending on how much rest / warm up you do). This means I can slot this in either on the weekends or earlier in the morning and still have time to do the daily Crossfit WODs.

As of this writing post I am currently on Week 5 of the program out of the 12 weeks. Below are my tested lifts:

Once I finish the program I will test and see if I exceed those numbers. Actually, within the Hatch program in Week 11 they have you do a lift at 103% which for me would be 210 lbs for the back squat. So if i make that lift I’ll have already set a new PR.

As a “fun” test I might test out my max unbroken wall balls again. Last time I tested I got 40 unbroken. Curious to see if having more trained legs will help (in theory it should!)

I actually finished the program several weeks ago and am currently in the 2nd cycle of Hatch. I liked it so much that I decided to continue and see how long I can ride this gain train. Either way I figured this update was overdue.

After 12 weeks these are my maxes:

So yeah both my back and front squat maxes went up. I think the biggest thing this cycle did for me was to help me get used to and comfortable with squatting. Because you are squatting twice a week with both back and front squatting starts to become more like 2nd nature. Also, what happened was during the 12 weeks my Crossfit gym also programmed in additional squats which I would occasionally participate in which just added more volume per week… so it is difficult to say that Hatch alone helped, but there’s no doubt it was a big part.

Another added benefit of doing Hatch is I also PR’d my squat clean. Having a stronger front squat made a big difference when standing up the weight. So overall happy with the results. It’s not huge gains, but if I can continue adding 10 lbs here and there every cycle without plateauing then I’m find taking my time to continually get stronger.

Right now I’m actually 7 weeks into my second cycle of Hatch. I’m going to spend some extra time working on accessory lifts like hip thrusters and glute bridges. I think improving glutes should have some good carryover.

Eventual goal is to get to 260 or so. Might take a better part of year to get there, but as long as I don’t get injured, like I said, I’m fine taking my time.

It’s way over due, but I thought it would be good to update this post after my second cycle of Hatch. Long story, short. I didn’t make any new gains in my back squat. Near the last few weeks of Hatch they have you test your 1 rep max back squat and I failed at 225 lbs which was 10 lbs over my previous PR of 215.

I followed the program the same as the first cycle, but I think one of the reasons for not seeing the same progress as the first cycle was that I wasn’t getting as much volume as I needed to realize improvement. During the first cycle my Crossfit gym was doing a squatting program alongside my Hatch program so by participating I think I was getting in more reps that helped. This second cycle I didn’t have the same extra reps built in and that might have hurt my progress.

After running 2 cycles of Hatch below are what I think are the Pro’s and Con’s.

After the Hatch I moved on and did another popular program called “Building the Monolith” which I will document in a future post.