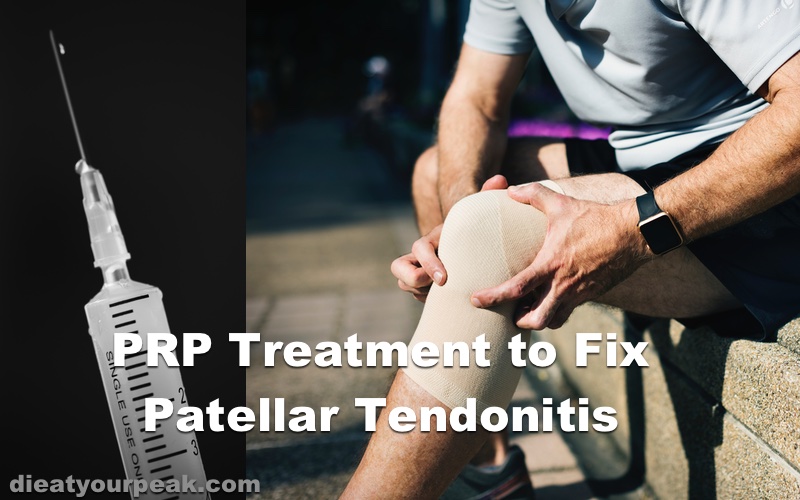 After starting Crossfit I developed patellar tendonitis (also known as patellar tendinopathy or “jumper’s knee”) in my left knee. I ignored the pain until it got to the point where I avoided full depth squatting or jumping as it hurt too much. I tried to rehab it on my own, but with no success. It wasn’t until after getting a PRP injection into the affected knee that it fixed my tendonitis and I was able to move again.

Please keep in my mind everyone’s case of patellar tendonitis or tendinopathy is different. For some doing some simple rehab exercises works for them, but in my case it didn’t. Likewise while PRP worked for me, it might not work for you. If you’ve exhausted other remedies and haven’t found a solution PRP might be an option to consider. When in doubt be sure to consult a medical professional before having any kind of treatment.

I joined Crossfit in December of 2016. Prior to starting Crossfit I had been doing circuit training / boot camp style workouts for a few years and didn’t have any knee issues. After a few months I started noticing pain in my left knee. Anytime I would squat to depth or do box jumps I would notice pain in my knee tendon. I ignored the pain for a while as it wasn’t that bad in the beginning.

Over time the knee pain wasn’t improving and was getting worse. I self-diagnosed myself with knee tendonitis based on these symptoms:

Now knowing what I had, I did what most of you are probably doing now, I googled different treatments. Most of the treatments suggested things like single leg decline squats, improving muscle imbalances, stretching, etc… For the next year I tried different things, but nothing really helped. The pain got bad enough where I avoided movements like squats, wall balls (i know, a staple in crossfit!), box jumps and anything where I had to bend my knee to a significant degree.

Looking back, the severity of my tendonitis had gotten to a point where rehab and resting weren’t helping. I had damaged the patellar tendon to where it could only heal to a certain point, but then once slightly aggravated the pain would return. When I touched my left knee it felt thicker than my right knee’s tendon. As if scar tissue has formed around it.

As mentioned this went on for over a year. My theory on what caused the tendinopathy was that since I was new to Crossfit and the workouts used heavier weights than I was used to that I over stressed my knee tendon. I was doing more volume than my knee could recover from so it never was able to fully heal. It wasn’t until April 2018 that I decided to give PRP Treatment a shot.

What is PRP Treatment

PRP stands for Platelet Rich Plasma. The treatment involves the patient getting their blood drawn and then put through a centrifuge where the platelet cells and plasma in your blood is separated out from the other cells. Platelet cells are involved with healing within your body so the theory is that by concentrating these platelets and injecting them into an injured area (like a tendon) that it will signal the body to rebuild and heal the affected area.

Unfortunately I don’t remember how I even discovered PRP for patellar tendonitis. I want to say it was after listening to a Joe Rogan’s Podcast where me mentioned how he got PRP done for his shoulder pain. After that I went down the rabbit hole searching for PRP and patellar tendonitis. I did come across a research study that looked into the affectedness of PRP treatment comparing one injection vs two injections. While it didn’t compare it to zero injection based on what I could find PRP looked promising for helping with patellar tendonitis.

Why PRP Was Worth Trying

It’s debatable whether PRP is truly effective. Some say it doesn’t help while others say it completely healed them. There were anecdotal accounts of it helping tendonitis, arthritis and other joint issues. However, I didn’t find anything really in-depth about how it specifically helped patellar tendonitis. This is one of the reasons why I wanted to write this post.

In the end since I had tried other remedies which didn’t help I figured it was worth trying for a few reasons:

On April 25th, 2018 I went in for my consultation. To be honest the doctor I went to didn’t really give me much additional info. He basically just asked if I wanted to do the procedure that day. My guess is he figures if you’ve come this far to talk to him you probably know whether you want to do the procedure or not. Especially since the injection itself is not covered under health insurance plans. He ended up being right since I ended up giving him the go ahead.

After that basically the process was pretty straightforward:

Where I was a little confused was the doctor injected me three times. He had listed different prices for the number of injections, but I think that was for follow up injections. I’m not sure compared to other doctors if three is the normal number of injections they give or if it’s based on the patient and their issue. I was afraid the doctor was going to bill me for three injections instead of one! But luckily I was only billed for one shot.

The shots themselves weren’t painful,. When they are injecting the platelet solution into the knee there is an uncomfortable pressure, but overall not much pain. After the injections they sent me on my way. The real pain came a few hours later. The knee hurt to walk on so I stayed off it that night and didn’t work out for the next few days. I believe he told me no exercise for the week.

During that week I decided to get an MRI done so I could confirm if indeed I did have patellar tendonitis. I know I probably should have done it prior to getting the PRP shot, but I figured it wasn’t going to get cured within a week and might as well find out since I had the doctor’s referral for the scan.

Turns out my self diagnosis was right! Patellar tendinosis and specifically:

The Road to Recovery

Within a week I could tell that my knee was feeling better, especially compared to before. Some might say it was because I had to stay off my knee after the injections that this rest contributed to its healing. I had taken time off before and this time felt different. It definitely wasn’t healed within the first month or two, but I noticed that the pain was much better than before getting the shot.

In June, about a month after the shot, I started squatting again. However, since I didn’t want to push my recovery too fast I still only did box squats as I didn’t want to go below parallel. For the next few months I did box front and back squats. It wasn’t until November that I felt confident enough to start squatting to full depth (ie below hip crease). What was great was the pain was no longer there and even after a squatting session the pain wouldn’t flare up like it would before. It felt significantly better.

However, while I could squat again and box jump to my heart’s content I did notice certain movements still hurt, namely, single leg pistol squats. I can do them, but only after a few I noticed the pain is not a “good” type of pain. So while I feel like I am much improved I can’t say I’m one hundred percent healed. Maybe like 90% – 95%. The positive is now I can do most of the movements within Crossfit without the pain.

Conclusion and Tips Regarding PRP

All together you could say that my recovery after getting the shot took 6 months . It’s hard to judge exactly when I was “recovered” since it’s more about when I was comfortable moving like had prior to being injured. Before the shot there were times I thought I was getting better, but then after a light squatting session I would end up in pain again. However, post-shot once I started moving again I can say that the change has been night and day. I can say it is a definite improvement which no rehabilitation that I tried could compare to.

Whether this was a placebo effect or an actual “cure” I would say it was definitely worth it. If you are in a similar position I would recommend looking into PRP for patellar tendonitis.

Looking back on my experience here are some suggestions should you consider PRP for patellar tendinosis:

Would Love to Hear From You

Let me know if you’ve done PRP for knee tendonitis and how it turned out for you in the comments below. Unfortunately I’m only a sample size of 1 (n=1) so while I would love to say it can help you there’s chance it might not so if we could hear from more people that would definitely help others who are looking for help with their tendonitis.

Below are some additional resources I’ve found that might help your patellar tendonitis: