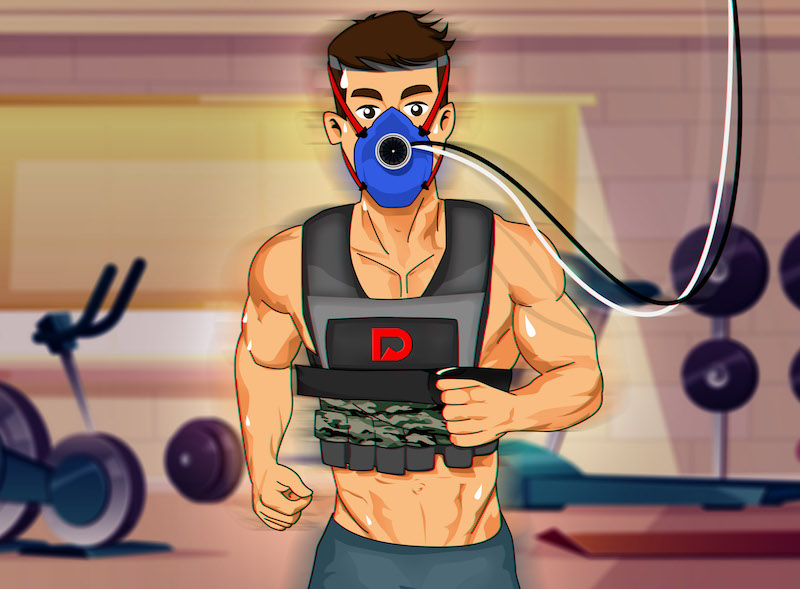 So you want to increase vo2 max. If you’ve read our post about VO2 Max and The Reason to Measure Heart Rate Variability on the Apple Watch you’ll know why measuring VO2max is so important if you’re an athlete or heavy into fitness. In that article, we mentioned that your Apple Watch and other fitness wearables can also provide a good VO2max estimation. The reason why wearables can only give a “predicted” measurement is that these devices can only extrapolate from your heart rate reading.

To measure VO2 max accurately, you’ll need to use a machine that can measure the volume of your oxygen intake vs the carbon dioxide you expel. You’ll usually find this equipment in some gyms and while you can also buy one, it typically only makes sense to do so for professional athletes. People who do not train to compete often find that wearables are able to provide accurate enough data to see if their VO2 max progress. While measuring your VO2 max can be challenging, improving your vo2 max doesn’t have to be.

Maximal aerobic capacity or VO2 max is often referred to as the “gold standard” since it is a good indicator of how efficient your cardiovascular system works. It can also tell if you are at risk for contracting heart disease, diabetes, or even cancer.1

VO2max was first conceptualized by Nobel laureate physiologist Archibald Hill in 1923. He observed that the body’s oxygen requirements increased proportionally to running speed. He also saw that the rate of oxygen used by the body hits a peak even when the running speed is further increased. This peak occurred at different running speeds in different people after which exhaustion closely followed.

This is due to the body’s shift from aerobic to anaerobic energy production where it can no longer use oxygen. In this process, the muscles start to increase production and accumulation of lactic acid. This causes pain, fatigue then muscle failure. Highly conditioned athletes are able to clear lactic acid from their muscles faster

You will frequently come across the word aerobic along with VO2max. It simply means “requiring oxygen”, with anaerobic being the opposite.

VO2max is expressed as mL/kg/min which means milliliters of oxygen used in one minute per kilogram of body weight.

Not everybody is born equal

Your VO2 max level is dependent on factors like age, gender, fitness level and outside factors like altitude. Unfortunately, genetics largely determines your VO2max potential. This means that each person has their own acceptable and ideal VO2max levels and there are people who genetically predisposed to have higher peak levels of VO2max.

For example, retired Olympic skier Bjørn Dæhlie was measured to have 96 ml/kg/min in the 1990s. This was reportedly the highest VO2max levels of all athletes at that time. However, he may have been dethroned by an 18-year-old Norwegian cyclist Oskar Svendsen who reportedly achieved 97.5 ml/min/kg in 2012.

However, there are average values that you can compare your VO2max levels against. These values can give you a rough idea of where your cardiovascular health stands. Below is a chart that shows the lower and upper VO2max levels for adults in different age ranges.

The average person can potentially raise their aerobic capacity around 15 to 20% with sufficient training.2 However, genetics account for so much that some people won’t be able to increase and maintain their VO2max even with training. These individuals are called “low responders” and some have even been observed to have declining VO2max after training.

Weight also makes a big impact on one’s VO2max. More specifically, however, the amount of lean mass to fat that you have. 3 Researchers have found lean mass to be the most appropriate measure of body size or composition for scaling of VO2max. Additionally, it was even suggested that the amount of fat you have will be proportional to how bad you perform on a VOmax test!

Don’t despair though. Not everyone has the genetics to be an elite athlete. What’s important though is how close you come to hitting your peak VO2max levels and making it stay there.

Testing and ideal levels of VO2max

As mentioned earlier, the most accurate way to tell your VO2max levels would be to get on a metabolic gas testing machine which can be found in sports performance labs. This machine can accurately measure a person’s ability to extract oxygen and use it for aerobic performance. It also measures how much carbon dioxide is exhaled since the exchange of oxygen and carbon dioxide in the body can show how much you can cope with fatigue and what output they are able to compete with.

Before taking the VO2max test, you will need to refrain from exercising or training at least 24 hours prior. You will also have to avoid food, alcohol, tobacco, and caffeine for at least three hours before the test.

In the test, you will be exercising on a treadmill or bike while breathing through a gas analysis device. You will have to go through an increasing amount of activity so the test can see when your body shifts from aerobic to anaerobic metabolism.

To increase your VO2max levels, you basically have to push the boundaries of your aerobic metabolism repeatedly through exercise. However, its a bit more complicated than that and not all kinds of training will be efficient in increasing it.

It is well-known in the sports and fitness community that High-Intensity Interval Training (HIIT)4 brings the best results in increasing one’s VO2 max levels. In fact, there are a number of studies5 that support this.

HIIT essentially pushes your cardiovascular system to its limit, then letting it rest. This follows the principle of “Use it or lose it” meaning that your body will only gain up to what is demanded of it. HIIT allows you to do more of this in a shorter amount of time. This is why it is efficient in raising VO2max levels.

It should be noted that HIIT is not just random bursts of exercises. There is such a thing as heart rate zones which we mentioned in Apple Watch Hacks for Health. The idea is that the intensity of your training will depend on how hard your heart is working in each of the 5 zones. This will allow you to tailor a workout program that increases your VO2 max in the most efficient way possible.

HIIT comes in different forms and can really improve vo2 max if done consistently. It can even be adapted into any sport. Some of the simpler but more popular ones are the following:

Your lifestyle, which includes your diet, has a great impact on your VO2 max levels. However, food and supplements alone won’t increase it. They can only provide your body with nutrients to help it perform better during training.

While it is fairly obvious that exercises that push one’s cardiovascular system to the limit increase VO2 max, your workout routine should also include ample time for rest and recovery. In fact, most runners agree on a 1:1 ratio10, meaning that for a certain amount of training, you should get an equal amount of rest. For example, you should get 3 minutes rest after doing 800 meters for 3 minutes.

3 thoughts on “Ways To Increase Your VO2 Max”