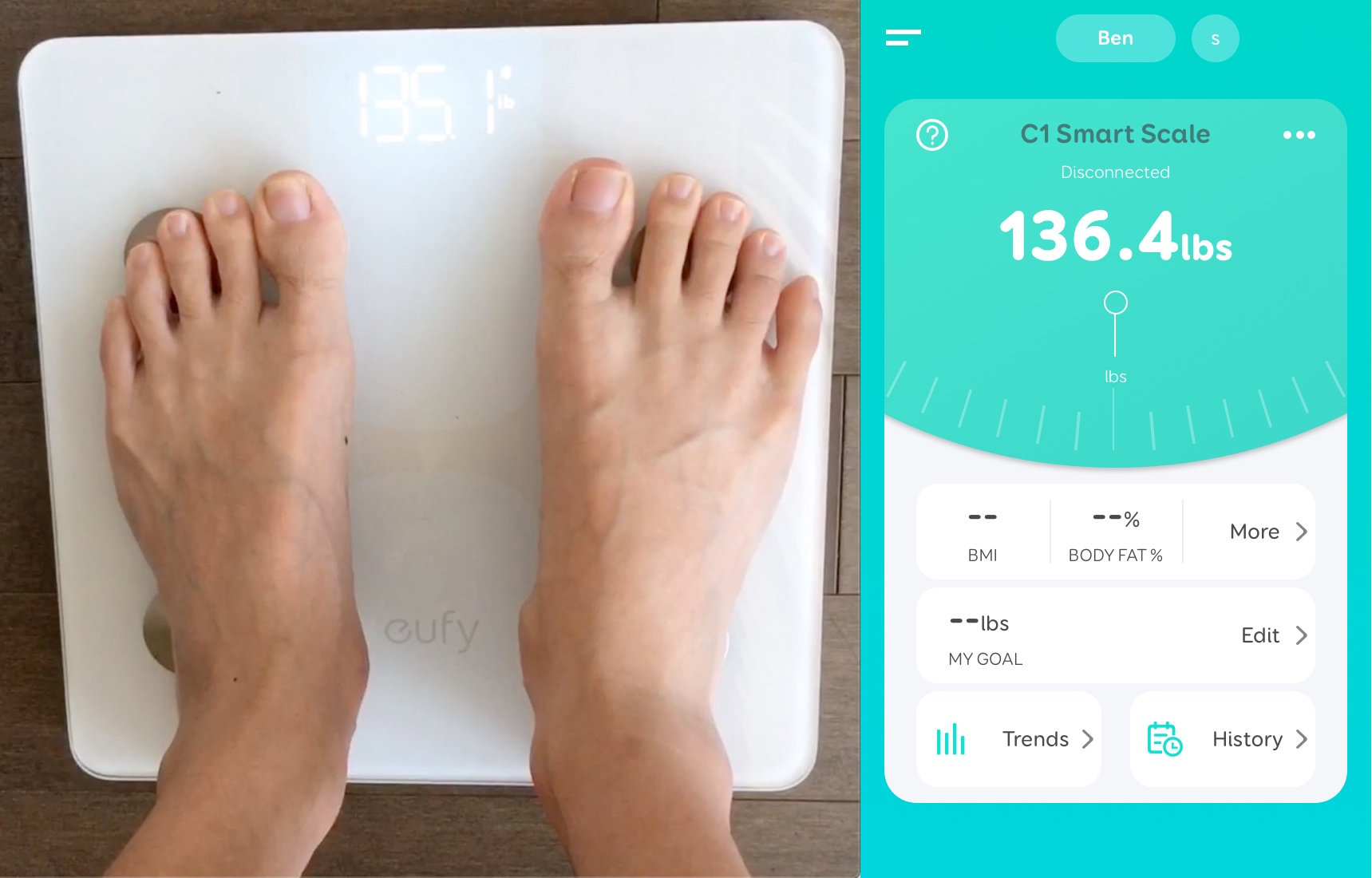 Recently my body weight scale broke and I was in the market for a new one. After combing through Amazon I decided on the Eufy Smart Scale C1. The reviews were decent and it wasn’t too expensive. The key thing I wanted in my next scale was the ability to log my weight automatically in Apple Health.

I use the Health app to store my workouts, heart rate data, and other biometric data I’m able to collect. The eufy Smart Scale C1 checked off that box and also since it was made by Anker, the same guys that all of those power banks for cell phones, I felt comfortable purchasing it.

What wasn’t immediately clear was what the flashing of the lights meant when measuring your weight. When you step on the scale it displays your weight pretty quickly, but then there is a flashing bluetooth symbol. Later I learned this means the scale is looking to connect with your phone with the EufyLife app.

If it does find the app and establishes a good bluetooth connection it will then display extra dashed lines (looking like it’s thinking) and during this time it means it is measuring your other biometric data. This biometric data is not displayed on the scale itself, but has to be viewed on the EufyLife app.

I didn’t really care much for the other measurements, but if you are interested it measures / calculates the following:

Quirks About the Smart Scale C1 You Should Know About

The Smart Scale C1 is a pretty good deal at $23.99 (regular price at the time of writing is $29.99 so keep an eye out for coupons). However, there are some quirky things about it when in use.

My wife and I both use the scale to track our weight. Before buying the scale i thought I read how it could distinguish different users when take measurements. I don’t know if it was because my wife and I are similar in weight, but it never was able to distinguish the different users. This mean her weight data ended up being synced with my data on the EufyLife app which then got synced to Apple Health.

The only solution I found was to have her download the app separately and then right before taking a measurement to open the app. The scale seems to function on the concept of the first device it connects to is the device that will get the data. So if she opened the app first then steps on the scale that data would correctly sent.

Then if I wanted to measure my weight she would have to close the app and I would open the app on my phone and then step on the scale. If you are just using the scale for yourself then this should be an issue, but it is a little annoying.

Last Measurement is Store if EufyLife App Not Used

The good is you get an easy way to sync your weight without always having to open the app before weighing yourself. The bad, however, is that if anyone else happens to step on your scale that weight will get synced with your data. It basically stores the most recent weight measurement and waits for a connection to sync to. As I mentioned the scale doesn’t really determine who the weight belongs to so you could be stuck with incorrect measurements.

A big thing for me with this scale was being able to automatically log weight into Apple Health. When the Smart Scale works it’s great. However, as mentioned above I’ve had issues with the wrong measurements being synced to the EufyLife app.

The good news is that it is easy to delete incorrect data from within the app. What I didn’t know is if you delete it in the EufyLife app it doesn’t remove the data from Apple health. This means if you want to have accurate data in Apple Health you have to also delete it within the App. I thought it would be synced together, but it isn’t. So if you find erroneous readings just remember to delete it in both apps (EufyLife and Apple Health).

There is some weirdness when multiple people have to use this device. Also sucks that you have to setup a user account through the EufyLife app in order to use your scale. Because it’s bluetooth that means you the app and your phone have to be nearby which can be annoying for some people. If that bothers you enough it’s probably worth looking into a WiFi enable smart scale. The downside with those scales is typically they are a lot more expensive (like over $80). For the price I paid and the minor annoyances it’s good enough for my purposes.