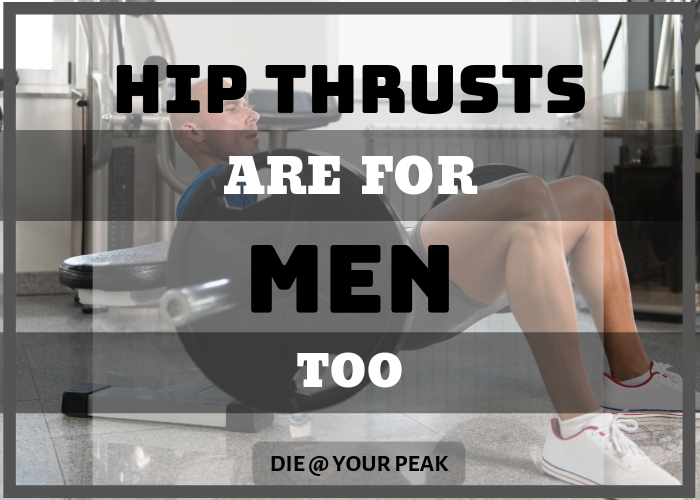 Aside from strengthening their hips and glutes, some women want to show off their big, rounded, attractive butt. Those bottoms are to die for and some, if not most men, drool whenever they see them. But what about men? Do we still need to include hip thrusts in our workout routine even if we already have squats and deadlifts which are great for our glutes? Apparently, we do, and not just because some women find men more attractive if they have well-formed butts, of course.

Whenever we look up hip thrusts and butt workouts on the Internet, a majority of the articles about it pertain to women, as its major market. That means men are almost ashamed of doing hip thrusts because it’s kind of a feminine thing to do. Oftentimes, this stigma can actually make men weaker in terms of utilizing the gluteus maximus, the biggest muscle in the body. Little do we know that hip thrusts can correct certain conditions such as weak glutes, unbalanced hip-to-knee rhythm, poor movement mechanics and joint health. Sitting all day at work or even at home has become an epidemic that we cannot instantly change. This lack of “butt movement” and disinterest in lower body strength has led us to have our butts or glutes being inactive or weak, which is not supposed to be the case. Remember that stronger glutes are equal to better posture, more power, performance capacity, and confidence.

The hip thrusts are underutilized for aesthetics, athletic development, and overall strength. For your information, there are many benefits to men in doing hip thrusts.

Some experts believed that world-class athletes, top-level powerlifters, and the fastest sprinters won’t feel a difference when they add hip thrusts in their routines, thus they didn’t need it. The truth is, most gym-goers and athletes need to include hip thrusts to improve their squats and deadlifts. It’s not only to increase butt size and appearance, but it’s also a good isolation exercise to make our lower body stronger and our leg exercises better.

Nowadays, hip thrusts are becoming more common in gym workouts. Both women and most especially men respond to this exercise very well and have shown improvements in their form and strength.

As a general rule in doing hip thrusts, we should be able to hold the weight on top for about one-full second. If we can’t, that means that weight we used is too heavy.

Below are video samples in doing proper hip thrusts:

We should try different kinds of exercises. We should utilize every gym equipment, weights, and workouts so that to make all our muscles and muscle groups active. If you’re a man working out in the gym, don’t be ashamed to do hip thrusts. Gone are the days when women are the only ones who perform butt exercises, because men should also do them, alongside squats and deadlifts. Beyond butt aesthetics, including thrusts on your workout can make you a complete package.