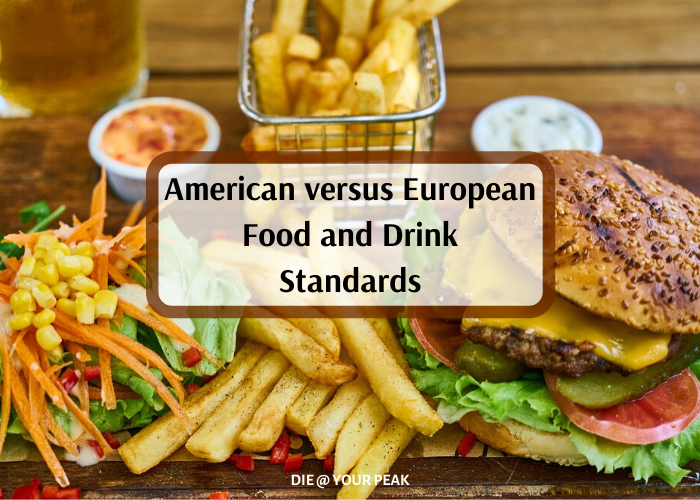 Some of us may not look at the labels very well when buying food and drink products, except for the brands we want to get. Usually, we would just get them from the grocery shelves and and stuff them to our carts. But, if we look closely and compare them, especially the U.S. and EU products, we would be able to distinguish each one’s standards.

It’s sad that some pesticides, such as Dacthal, are banned in Europe and classified as a carcinogen is allowed to be used on many of items we eat regularly in the US.

The U.S. and Europe differ in many food product standards and regulations. One of which is the food additives wherein there are more European restrictions because they only allow not harmful additives to it. America on the other hand allow additives until proven harmful. Many artificial ingredients such as petrochemical-based food coloring, BVOs, and RGBHs that are banned in Europe are still used in the U.S as a result. Another is that FDA (U.S. food policy) discloses 8 common allergens namely eggs, fish, shellfish, soybeans, peanuts, tree nuts, milk, and wheat, while EU FIC (European food policy) requires listing 14 allergens directly in the ingredients section of the food labels and restaurants. When it comes to food labeling, FDA changed twice while the European changed it recently focusing on mandatory information, allergens, and nutritional information listings.

According to the report, has smashed the U.S. in terms of food safety issues. EU takes a higher road by having stricter and cleaner food guidelines such as restrictions in food production pesticide use, hormones, GMOs, questionable additives and chemicals, drug residues in seafood, antibiotic use in organic farming, and gestation crates.

Chlorine-washed chickens are banned in the U.K. but not in the U.S. What more, farmers in the U.S. use higher doses of antibiotics on their livestock to prevent illnesses and promote growth. This is probably a reason why we are becoming drug-resistant. They also inject hormones under the skin of beef cattle to promote faster growth while feeding them less. They also spray pig carcasses with lactic acid to be cleaner. American dairy farmers inject synthetic bovine growth hormone to the cows. Though the downside is that they feel pain by this method. FDA also approved the use of ADA, which can be found in yoga mats, as a whitening agent in doughs and cereal flours. They found arsenic in inorganically-produced chicken from the U.S., which is harmful to humans. There are also 82 banned carcinogenic pesticides from EU that are still used in the U.S. EU thinks of all of these practices as harmful and unhygienic.

Many people are crazed about buying organically-produced food and drinks no matter how expensive they are. The story seems to be different in Millésime Bio, the biggest organic wine trade in France. Organic wine is booming in Europe but nobody talked about it. North America still has the largest market for wine all over the world, though. Organic wine production and consumption in Europe is rising while across America, only a few appreciate it. EU allows the inclusion of sulfites, which is an allergen for humans but almost difficult not to use for export, in their organic wines. This is opposed to the U.S. which started banning the use of it. This decision led to a decrease in organic wine consumption in America.

Travelers and wine lovers may be wondering why whenever we drink wine from the U.S., we feel a headache afterward? This is not the case when we drink some in Europe, though. One of the Italian wine enthusiasts said that Americans use more sulfites in their wine. As we know, sulfites are an important ingredient to help preserve the wines. All wines need this but it’s a matter of how much of it to put. Seems like EU and the U.S. set a maximum amount of sulfites in the wines. In Italy, though, they are conscious about using only a small amount of it.

The appellation, which is a geographical indication for identifying vineyards for wine-growing, is a big deal in the wine industry. The Sonoma Coast, where most of the American wines are produced, may be meaningless as a wine’s origin description. That’s because the name of the place has been used by other wine producers on their description of origin. The appellation on wine labels tells us where the wine was grown. Each country has its own appellation and regulation systems. Generally speaking, the wine had to be produced in the appellation area, using specific grape varieties, while following its limit on alcohol strength. In France, the appellation system was established to protect against wine fraud. In Europe, appellations are important to give consumers confidence in how authentic their wines are. The U.S. has a more complex appellation system as they used surrounding wine-making regions or estates to form associations. That would make for expansive quality production and wine control. This is like a wine battle between authenticity and production quality.

Europe and the U.S. obviously have different regulations when it comes to meat production. The EU restricts the use of growth hormones to farm animals. This is also why they banned meat imports from the U.S. Growth hormones in meat can initiate tumor and cancer, as well as DNA damage in humans. Strict regulation in Europe doesn’t mean their meat is all organic and free from chemicals. Some animals are treated with antibiotics when sick. Organic meats in the U.S., however, are free of growth hormones and antibiotics. What’s surprising is that EU organic standards do not forbid feeding animals with non-organic grains, but allows the GMO ones. The U.S. follows an organic-only feeds, but do not exempt GMOs.

There’s a clear distinction between European and American fast food. One of the many things is that the U.S. allows the use of outlawed chemical ingredients to food items. Speaking of added sugar, the U.K. use less of it in fast food restaurants than in the U.S. GMO ingredients must be labeled in the U.K. while it’s voluntary in the U.S. McDonald’s U.K. organic milk, coffee, tea, and oatmeal. McDonald’s and other fast food franchises in the U.S. use milk from growth hormone, antibiotic, and GMO-fed cows. Processed foods in U.S. supermarkets contain banned ingredients from the U.K. and other countries. Americans can easily put the chemicals in their food probably because of lighter regulations. Also, the majority of the population are either misinformed or doesn’t care about it, as long as they get to enjoy their tasty fast food.

Obviously, Europe is the real winner here when it comes to food standards and regulations. The U.S. should take note of this and up their game to make their products much safer to consume. Truth be told, no matter what food products we buy and where we get them, we can’t always be sure that they’re all organic and free from unnecessary chemicals and GMOs. It’s better though to do our research and know the food facts. It’s also up to us consumers to make better decisions in choosing what safe and healthy to eat.

If you want to listen to a great interview with Shawn Stevenson of the Model Health podcast and the Food Babe discussing all the corners being cut and the attempts to save money at our health expense, check out this post.